The seminar, "Nation-building in the New South Africa," was sponsored by the Council on International Educational Exchange (CIEE), and featured lectures by professors from the University of Cape Town, University of Pretoria, government ministers and non-governmental organization leaders.

"Eighteen other professors from around the United States and Canada spent six nights in Cape Town, and five nights in Johannesburg-Pretoria area," Grove said. "We visited black townships, including Soweto, and had several opportunities to interact with local people, students, and professors."

While in Africa, Grove also had the opportunity to visit Robben Island, where Nelson Mandela and the guide were former prisoners.

"I learned a great deal about the challenges to rebuilding the new South Africa, and got to see many of the things that I'd been reading about for years," Grove continued.

Grove also attended The International Society of Political Psychology Conference in Boston this summer. She serves on the Governing Council, and Executive Council, and is editor of the society newsletter.

Grove, who has been with Westminster College since 2000, earned her undergraduate degree from the University of Georgia, her master's from Lancaster University, and her Ph.D. from The Ohio State University. 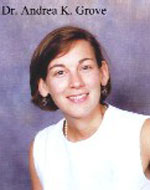