A native of Colombia, Fernández earned an undergraduate degree in classical guitar from the University of Antioquia and was a member of several musical groups that played bossa nova, traditional Colombian music, rock, and blues.  He has taught classical and folk guitar and piano in Colombian musical academies, including Amadeus, Metropolitan Institute of Education, and Coral Tomás Luis de Victoria, where he served as director and conductor of the Colombian traditional music ensemble.  He is currently a first guitar in the Toronto Guitar Society Orchestra.

The concert is sponsored by Westminster's Department of Modern Languages and International Cultures Club. 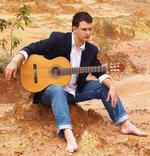